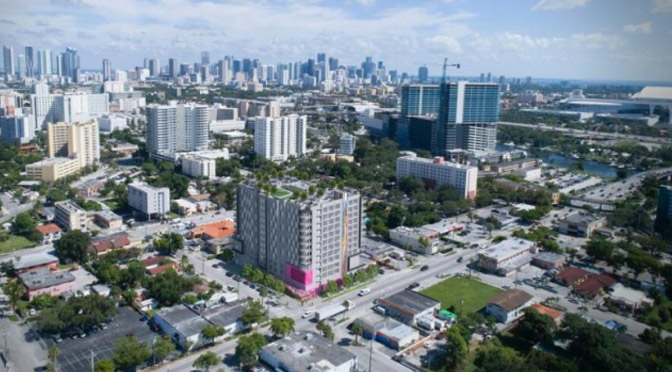 Neology Life Development Group, led by Miami’s leading Hispanic female developer Lissette Calderon, has delivered No.17 Residences Allapattah. Located in Allapattah, bordering the western edge of Miami’s Health District and the Miami River, the residential development at 1569 NW 17th Ave is a 192-unit attainable luxury rental apartment building in Miami’s richly historic and newly rediscovered Fruit Packing District. 50% of the units were preleased at the time of delivery and residents have begun move-ins.

No.17 Residences Allapattah is developer Lissette Calderon’s first ground-up residential project delivered in the area. The project was designed by Behar Font Architects and construction was led by Jaxi Builders.

“Much like we did 20 years ago when we pioneered the renaissance of the Miami River, we are excited to be at the forefront of reimagining this neighborhood and bring Allapattah back to life,” said Lissette Calderon, president and CEO of Neology Life Development Group. “As Miami’s last original, authentic neighborhood yet to be revitalized, Allapattah made sense for us to write its next chapter and we’re excited to make the vision a reality beginning with the opening of No. 17 Residences.”

Units at No. 17 Residences range from studios, one-, two-, and three-bedrooms ranging from 500 SF to 1,300 SF in size and will feature spectacular sweeping views of the Miami River and the city skyline. Rental rates start at $1,300 per month.

As a special nod to the area’s cultural appeal, Neology Life commissioned two prominent local artists to deliver street and mural art designs throughout the interior and exterior of the building including the Bollee Patino’s signature exterior marquis mural fittingly named “Rise Above.” Welcoming residents in the lobby is his 15-foot mural, “Be Yoursel Ballarina,” internationally acclaimed contemporary mix-media artist, Bollee’s first piece in Miami. The project also features signature murals by established Miami artist, Carlos Navarro, throughout the building including his piece “Strength.”

Amenities include a ground floor The Urban Park, which features an expansive green area with a children’s playground, a dog park and landscaping as well as a rooftop sky lounge with city and riverfront views. Other amenities include a movie screen on the 14th level and a swimming pool, outdoor living room with a summer kitchen, cabanas and sun deck on the fifth floor, a ground level features a fitness and wellness center including virtual classes, as well as a private zoom room and lobby living room with resident lounges for coworking and socializing.

The delivery of No. 17 Residences ushers in a new era for Allapattah, which is experiencing significant investments in real estate, arts and culture. New York-based Pace Gallery announced it chose Allapattah as the location of Superblue Miami, the immersive installation that will encompass an abandoned, 50,000SF
warehouse opening this spring. The installation will be located near the Rubell Museum, home to 7,200 art pieces and the fine-dining restaurant Leku, which relocated from Wynwood after 26 years there. The neighborhood has also attracted new dining concepts such as New York staple Hometown BBQ, which chose
Allapattah to make its Florida debut, and the recently opened Tayrona Restaurant + Patio from the owners of Wood Tavern in Wynwood.