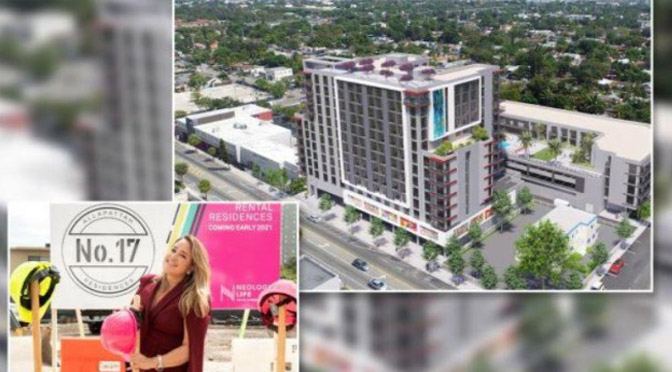 Calderon is planning Allapattah 14, a 237-unit rental building with ground-floor retail space on the site, according to a statement. In all, her company has more than 1,000 units in the pipeline in the area, including the 192-unit project No. 17 Residences Allapattah that recently topped off and the planned 323-unit Allapattah 16 nearby.

Calderon said in her statement that she’s building units in Allapattah “for residents seeking an alternative to the higher-priced urban districts nearby.”

Other developers who have planted flags in Allapattah include Moishe Mana, Robert Wennett and the Rubell family. The neighborhood is west of Wynwood and east of Miami International Airport.

In 2018, Calderon returned to the Miami River, where she had begun developing condominium projects in 2002. Her company, Neology Life, paid $61 million for the former River Oaks Tower & Marina, a 21-story, 199-unit building on the river at 1951 Northwest South River Drive, and renovated and rebranded it into Pier 19 Residences & Marina.